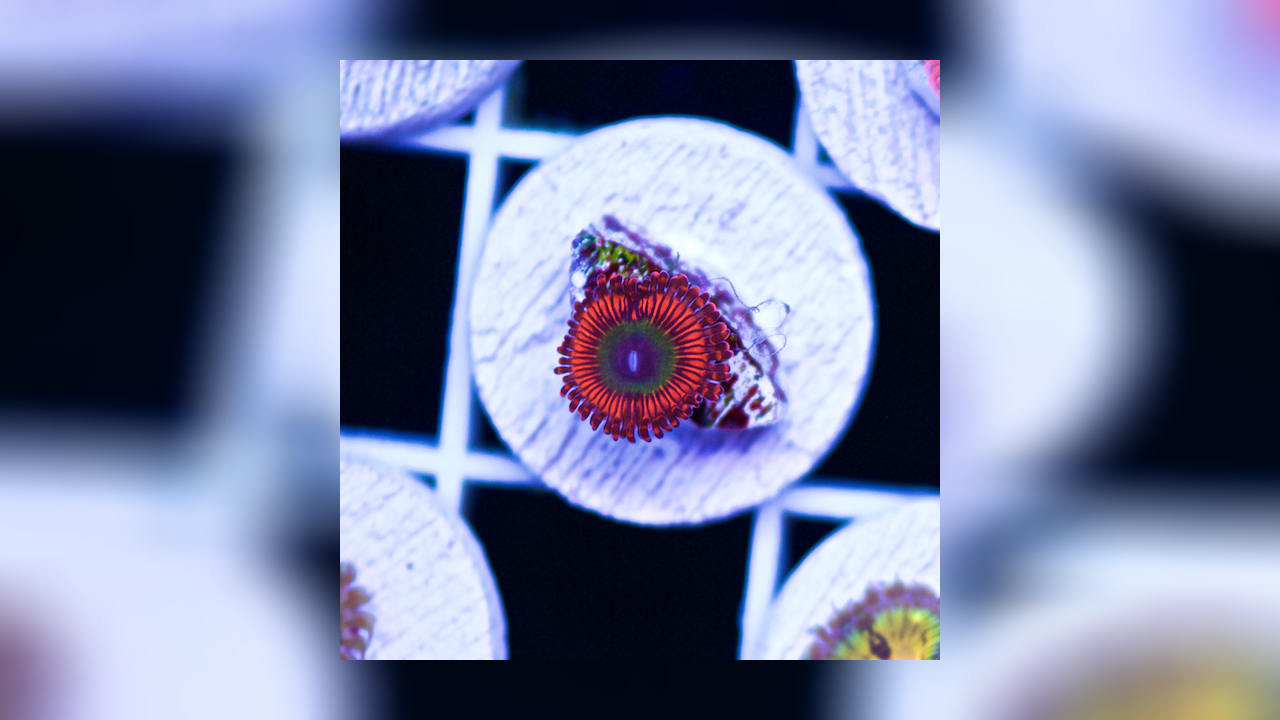 Toxicity:
Has a poison harmful to health
CITES:
Not evaluated

More related species
in this lexicon:

These beautiful Palythoa or button polyps are sold as Palythoa „ARC Poinsettia “ at Local fish Dealers and in online coral Shops. .. Many Thanks to Cherrycorals for the wonderful Picture from ARC Poinsettia Palys.
Color: Orange, Purple, Green

Apart from their colour and polyp size most Zoanthus species look very much alike, so they can hardly be identified exactly by mere physical appearance. Marine aquarists and coral traders have assigned telling names to the large variety of Zoanthus species referring to the special colouration morphology of the polyps to identify a particular specimen. Firstly, these fancy variety names are commonly used in the stocking lists of importers and coral shops, secondly, the majority of saltwater hobbyists are more familiar with them and thirdly, the reeflex entries will be easier to find via search engines. So that is why we have decided to list the different varieties of Zoanthid species under their common fancy names on reeflex.
As a rule, Zoanthid corals are rather easy to care for and are often recommended as beginner corals.
They gain most of their daily nutritional requirements through the photosynthetic activity of their symbiotic Zooxanthellae, but also absorb nutrients and dissolved organic matter from the water column. They also feed on captured plankton.
Zoanthid polyps do not necessarily need to be fed directly, but will benefit from occasional feedings with finely chopped frozen foods, zooplankton additives or dust food, which will help them to thrive.
Their durability makes them to be rather forgiving to less optimal water parameters and lightning conditions. Zoanthus species may be placed in intensely as well as in moderately lighted areas, they are able to cope with moderate as well as with high and turbulent flows, however, strong currents directly directed towards the colonies may cause the polyps to stay closed.
Under proper lightning and water parameters most Zoanthus species will grow fast- sometimes too well, spreading over rocks and eventually supersede adjacent corals.

Some Zoanthid species, especially those in the genera of Palythoa and Protopalythoa can be highly toxic for humans. These Zoanthids may excrete Palytoxin, one of the most toxic organic substances in the world. Normally, this will not be noticed during the reefkeeper’s normal daily routine, but can become a real danger when Palythoa or Protopalythoa species are forcibly removed or fragged. Whereas several reef keepers have reported severe health problems they suffered when handling Palythoa or Protopalythoa species, species of the Zoanthus genus are generally considered to be rather harmless, at least there is no known case of a serious intoxication caused by a Zoanthus species. Nevertheless, since it is difficult for the average hobbyist to distinguish Zoanthus, Palythoa and Protopalythoa species from each other, you should always handle Zoanthid species with proper caution. When touching them or removed them for your tank, you should always wear protective gloves and goggles, was
h your hands thoroughly afterwards and avoid any eye contact.