Terpios gelatinosais commonly referred to as Sponge. Difficulty in the aquarium: Only for advanced aquarists. A aquarium size of at least 50 Liter is recommended. 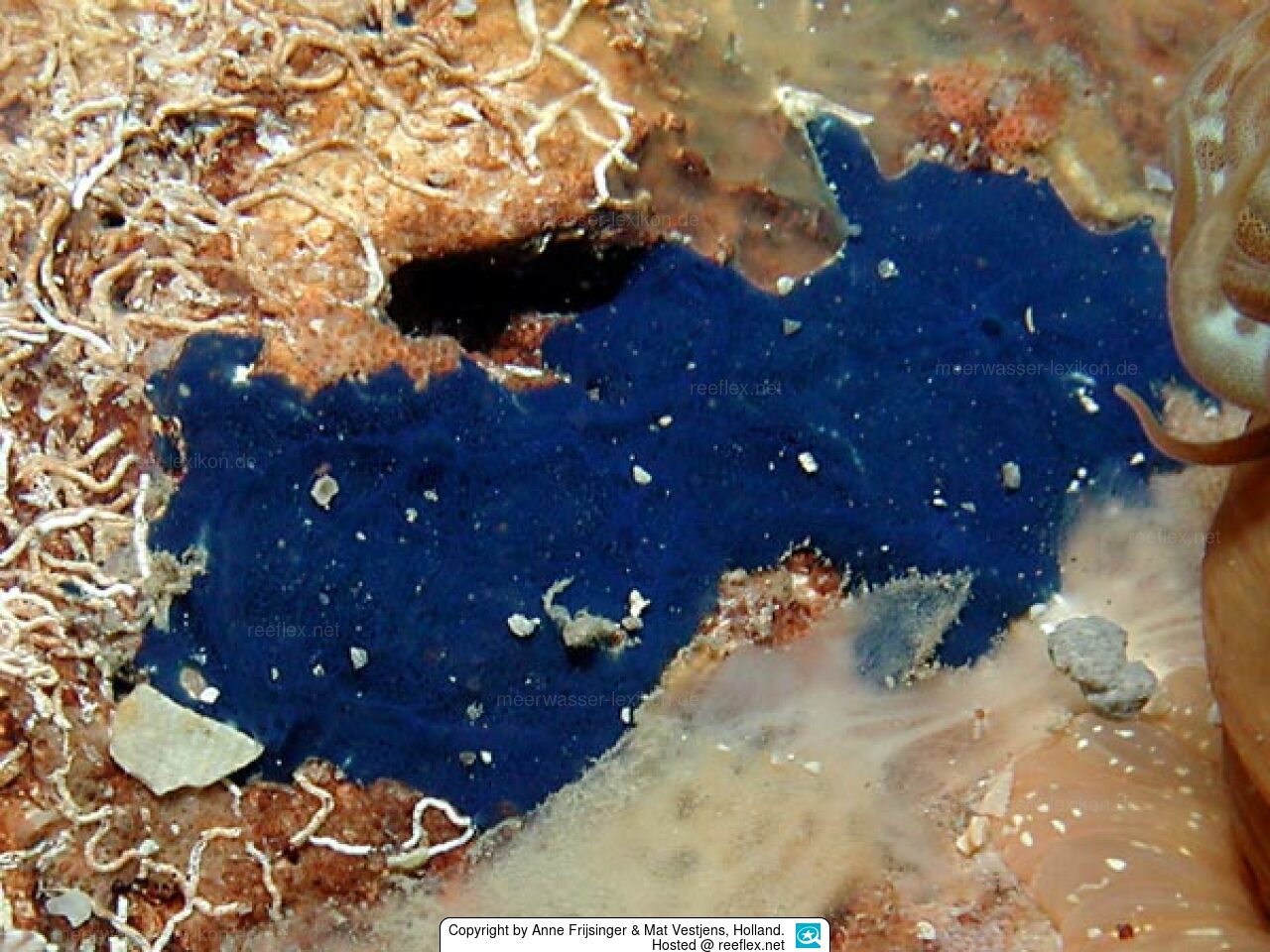 Terpios gelatinosa (Bowerbank, 1866), also known as Terpios fugax is one of the few truly blue species occurring in Western Europe. It forms thin smooth sheets in the lower intertidal on the undersides of boulders and in the shallow sublittoral on rocks and other organisms. It may also be orange-yellow and then is difficult to distinguish from Prosuberites epiphytum or Pseudosuberites sulfureus. It is a southern species occurring from the North Sea coasts of Britain westwards over most of the British Isles and southwards along the coasts of France, Spain and Portugal into the Mediterranean.

Colour: Basically ochraceous yellow or light brown due to pigment present in the choanocytes. Commonly the colour is transformed into a deep blue, (or a dull green or a bright orange yellow) by the presence of symbiotic algae, at least in the superficial parts of the sponge. The blue or orange-yellow colour persists in alcohol and in dried specimens.
Shape, size, surface and consistency: (Hymedesmia tenuicula) Small, thin sheets. Surface smooth, very occasionally minutely hispid. Oscules are minute, not distinct to the naked eye. Consistency is generally fairly soft.
Spicules: (Terpios gelatinosa spics) The tylostyles, ca. 250-400 x 4-6 µm, have a well-developed but irregularly shaped head with a rounded apex, often with a ring-swelling around the middle or base. The head may also appear heart-shaped in optical section, i.e. wide at the base next to the shaft and narrower, but rounded, at the apex. Lobate swellings—a characteristic feature of the genus Terpios—also occur. The smooth shaft may be straight, but usually curves gradually along its length. Sometimes there is a more pronounced curvature at about 1/3 to 1/4 of the length from the head. The shaft becomes thinner distally, ending in an acute point.
Skeleton: The skeleton is confused rather than subradial and the megascleres are not clearly divided into two size groups. There is a somewhat disorderly and loose arrangement of tylostyles, of which a few are usually directed vertically upwards. The tylostyles may be single, or united in places to form bundles or brushes which cross one another in all directions. The tylostyles in the bundles all point in the same direction, the heads and points tending to occur side by side. The spicules may be sparse or crowded depending on the individual. The ectosome does not have a tangential skeleton.
Ecology: On rocky surfaces and the undersides of boulders. In the Mediterranean it occurs on algae and other sponges. It hasbeen recorded as on bryozoans and corals. It is found both littorally, at low water springtide levels, and sublittorally to 85 m. The bright orange-yellow form (if this is really the same species!) only occurs sublittorally.
Distribution: Atlantic, North Sea and Channel coasts of Europe, W Ireland; Mediterranean.
Etymology: The name refers to the consistency of the sponge.
Type specimen information: The type is in the Natural History Museum, London: BMNH 1910.1.1.655, Cullercoats, Norman Collection. MCS voucher MNHN Paris: D-T-2476.
Text source: Marine Species Identification Portal